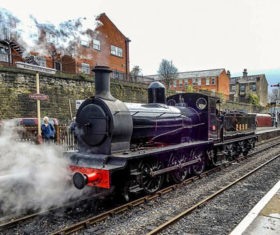 The locomotive is a rebuild of an “Austerity” tank engine. However, the result of the conversion is both a very practical locomotive for heritage railway operation, and does rather more than just ‘tip its hat’ to the many products of the private locomotive builders of Leeds, Stoke, Stafford, Bristol and elsewhere.

A wide variety of tender locomotives left the gates of workshops for export around the world that shared many features of this engine. The relatively small wheels and large cylinders were specified for tractive effort rather than speed.

In telling the story of locomotive building in the UK, Hunslet 2890 illustrates a type of which no example exists in the UK, but similar examples of which were sent around the world when the private builders would supply to specifications both offered by them and drafted by their customers.

We look forward to being able to explain to our visitors the place that this locomotive has in illustrating the design and evolution of steam locomotives and the export of engineering products around the world through the late 19th and first half of the 20th century.