At 1pm on Saturday 11th May, Evans Pharmacy staff closed and locked up their historic shop at 12 High Street for the last time before relocating into their new, state-of-the-art building at 11 Charles Street. Since being approved almost two years ago, these larger premises have been purpose-built to plans drawn up by Nottingham’s Allan Joyce Architects and are said to be more suited for a 21st century dispensary.

The two-storey building has been constructed in the former garden of Dairy Cottage behind Ruddington Library, with one downstairs room of the old cottage incorporated as a consulting room for the new pharmacy. As well as having more space, better facilities and increased security, the new location means it will also be closer to both our medical centres for those needing to pick up a prescription or other medication. 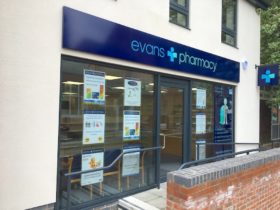 Meantime, what’s next for our old High Street chemist’s shop? It’s been a dispensary since 1905 and was run by three generations of the Phethean family until 1993 before being sold to a larger company, originally under the Manor Pharmacy brand.

At least the original back room from its earlier history at 12 High Street has been preserved and reconstructed within our Village Museum for future generations to see. However, a new tenant with a fresh use for the old shop has yet to be found. Just after The Bottle Top opened to fill the gap at 2 High Street left by Thomas’s Greengrocers, Ruddington village centre now has another empty shop at number 12, in addition to the vacant units at numbers 7-9 and 18 left by the closure of Barclay & Cook and the relocation of Grange Bakery.

That said, Ruddington’s High Street is in a much healthier state than many around the country. With our new Village Market, other initiatives like the Loyalty Card Scheme from The Ruddington Village Centre Partnership and Nottingham City Transport working with RUDDINGTON.info to encourage visitors to have a #RuddyGoodDayOut in our village, fingers crossed they can be occupied again very soon.