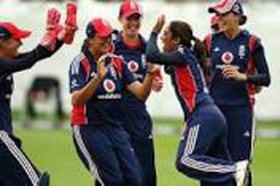 One of the attractions of living in Ruddington is the amazing diversity of the people who live here. This newsletter will feature some of these interesting people over the coming months. We start with cricket, a sport with long connections to the village. The Gunns lived here and went on to establish a world-famous cricket bat manufacturing company in Nottingham. Jenny Gunn currently plays for Notts and England, and she is the daughter of former Forest defender Bryn Gunn. However, this is not about bats, it’s about people, and it’s not about the past, it’s about now.

England Women played their first test matches in 1934 so this is not a new thing. However, these days, women’s cricket is a professional and truly international sport. There are three main international teams based at Loughborough – the performance squad, the academy and the development programme. Anna works alongside another physiotherapist to support these programmes both at home and overseas. Consequently, very recently she has been to Sri Lanka.

Anna is interested in keeping not just others but herself healthy. She is also heavily committed to the sensitive restoration of older properties and has been busy on her own home. So, what does Anna think is really good about living in Ruddington, and what is not so good, what could be better, and what is the potential for women’s cricket? That’s all in the next edition.