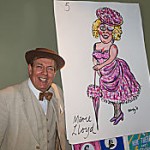 To raise funds for the “Links, Loops and Luddism” appeal for the purchase of Gunn Cottage at the end of Chapel Street, a series of five talks has been arranged in January and February.

Kathy Powis, a museum volunteer, explained “We hope there will be something to attract everyone in the variety of topics we are presenting, also we have listened to people who would prefer an afternoon event, especially during the winter months.”

David Darby, a popular speaker and actor, is the first with his “He’s Behind You” performance – a very entertaining history of the pantomime which will have the audience in stitches. Later on in the series there’s a talk about Pompeii and Herculaneum – a different time period for the Museum to be investigating!

All talks will take place in the old Primitive Methodist Chapel in Chapel Street and tickets will be available from the Museum or Kathy. Details of January’s talks can be found on the diary page. Museum posters and leaflets will include the whole series.