14 year local girl, Esmie Winwood, has enjoyed playing football from an early age, starting out in the boys’ team at Ruddington Colts. As a young child, she was identified as having potential by Sarah Richardson, who ran the after-school clubs that Esmie attended. Sarah is now a coach with Nottingham Forest.

Esmie eventually moved to a girls’ team at West Bridgford Colts and then got a place on the Nottingham Forest Regional Talent Club (RTC) programme. 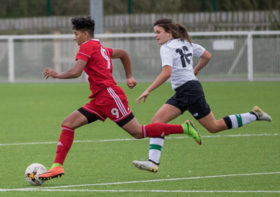 Currently, Esmie has to combine her studies as a Year 10 pupil at Rushcliffe School with attending residential training camps, where she’s trained by qualified FA coaches.

Having known Esmie for several years, I’m sure her determination and dedication to her sport will pay dividends and make Ruddington proud of her.