Volunteers from Ruddington’s heritage railway are celebrating reaching another milestone in its “reunification” project to create an 18 mile train line all the way between our village and Birstall on the outskirts of Leicester.

The tracks comprising Ruddington’s Great Central Railway – Nottingham (GCRN) and Loughborough’s Great Central Railway (GCR) are set to be rejoined once the 500m gap in the middle is bridged – meaning services will then be able to run between the two for the first time since 1969. So far, RUDDINGTON.info has told you about the installation of the new bridge over the Midland Main Line in 2017 and repairing the existing canal bridge at Loughborough in 2018/19. 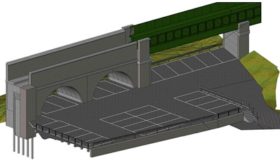 Now GCR reports: “The next piece of the jigsaw is the section across a factory car park (pictured left). It’s right next to the new bridge over the Midland Main Line bridge we’ve already built. If our fundraising goes well, we’ll build the bridge over Railway Terrace road at the same time – it will save on construction costs to do both together.

It’s about 50m of new railway in total but a vital part of connecting the two halves of the Great Central Railway. We hope to incorporate two bridge decks recovered from Reading into this phase.”

Unfortunately, this section alone will cost approximately £3million – roughly the same amount as has so far been raised and spent on “reunification”!

GCR adds: “The good news is, as we begin fundraising for this Factory Flyover section (as we’re calling it) we already have £100,000 in the kitty! That’s because many generous people like you are still contributing every month towards Reunification. If you are giving to the ‘Bridge to the Future’ or ‘Crossing the Canal’ campaign, your Standing Order will now go towards the ‘Factory Flyover’.” 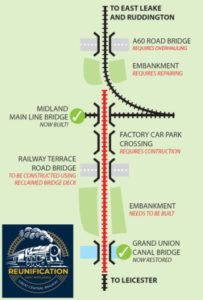 However, as shown on GCR’s map of progress so far, even if the Railway Terrace road bridge and factory car park crossing are constructed at the same time, there’s still an embankment which needs to be rebuilt, a second embankment requiring repairs and an overhaul of the A60 road bridge before reunification work is complete.

As reported in January, GCRN already has plans to run heritage trains from Ruddington throughout the year once an iconic “railbus” joins its fleet later in 2020. If all goes to plan, those journeys could be considerably longer in the future, but that will be quite a few years (literally) down the line.

If you’d like to donate to the Reunification East Midlands project you can do so via The David Clarke Railway Trust at http://www.gcrailway.co.uk/donations/donateprocess.php.