After a short period of closure, then reduced opening hours under short term tenancies, The Jolly Farmers is now back in business under full time management. Since the 18th of July Ruddington’s most northerly public house on Wilford Road has been in the capable hands of new landlord Mike Hembling. He hopes to turn around its’ fortunes having previously run successful pubs in St Albans and Ipswich.  He now welcomes the challenge of breathing new life into ‘The Jollies’. 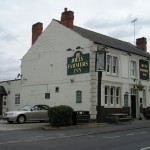 “It’s a proper locals’ pub” he says “and people are starting to come back.  We’ve got pool and darts and a great function room for meetings.  I’ve already introduced a ‘Divorced and Singles Night’ every Friday – a chance to meet new friends and enjoy yourself.”  Other entertainment, including live music and Karaoke, is just around the corner. Mike and his team are extending a warm welcome to customers old and new from noon until eleven Mondays to Saturdays and noon until half past ten on Sundays. “We’ll have an official opening night soon!”
For the future?  Real ales could return to the bar if there’s a demand for them,  And, after a revamp to the kitchen, it’s hoped food will soon be back on the menu – including some barbecues on the terrace before the summer’s out! (Researched & written by Graham Wright)