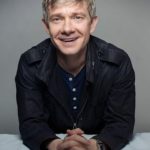 According to reports on social media, Martin Freeman – star of TV’s Sherlock and the blockbuster Hobbit trilogy – has been spotted filming at our very own GCRN. The heritage railway hasn’t released a statement on the subject, with those ‘in the know’ remaining resolutely tight-lipped.

What we do know is that the popular actor is currently filming an adaptation of the Oscar-nominated West End hit, Ghost Stories, slated for release sometime in 2017. Let’s hope the film includes some familiar scenery when it hits cinema screens later in the year!