Ruddington’s claim to have the oldest chippy in the world is being challenged by a fish and chip shop owner in Greater Manchester.
The interior of Mick’s Fish and Chip Shop, which used to be at the end of High Street, opposite The Green, is now preserved and on display in a new location at The Village Museum.  Records trace its’ history back to at least 1904. However fish frier Robert Whittaker says that he can date his “Sea Shell Fish and Chip Shop” in Stockport back to the same year.  He was particularly aggrieved about Ruddington’s claim when he learned that Mick’s closed in 1940 and is now an exhibit – whereas his is still operating 106 years on! 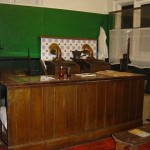 Ruddington Village Museum Curator Gavin Walker said: “We can tell the age of the chip shop from the equipment which was used.  Without doubt we have the OLDEST fish and chip shop interior.  There’s a beautiful frier with brass and copper binding and blue and white tiles.  We can date it back to between 1902 and 1904. However Mr Whittaker may well be running the longest TRADING fish and chip shop.  So perhaps we can BOTH win?!” Neither business can claim to be the FIRST in the world.  It is documented that fish frying originated in London’s Whitechapel in 1858 whilst the first true “Fish and Chip” shop opened in Oldham at around the same time.
(Researched & written by Graham Wright) Note: The Village Museum is now closed until Easter 2011.