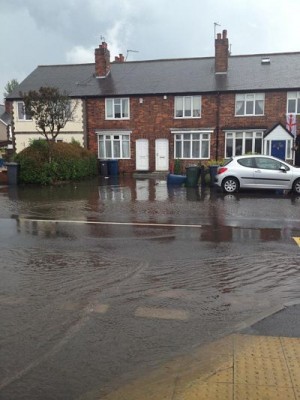 Freak weather conditions caused chaos in Ruddington throughout late June and early July as roads were flooded and eagerly-anticipated events cancelled. Although we were lucky enough to escape the severe flooding experienced in other parts of the country, much of the ground in our parks and playing fields stood under water for weeks at a time.
And during the heaviest deluges, some of our main thoroughfares turned into fast-flowing rivers for short periods of time – as these photographs, captured by a Wilford Road resident, show. You can also view videos of the flooding on YouTube by following this link:  http://www.youtube.com/channel/UCSpoH2LqztsUak5OSfxtmIw 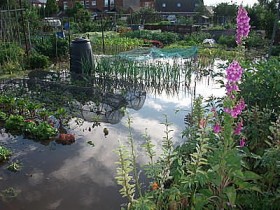 Sadly, the unprecedented levels of rainfall also led to three of Ruddington’s biggest events for 2012 being cancelled – the Rush4Health festival in the Country Park, the Wakes Fair on Sellors Playing Fields and the first Ruddington Village Festival to be held for 12 years (although the Beer Festival and Folk Concert did go ahead as planned). Even the Allotment Competition judging was postponed as plots were under several inches of water.
Rush4Health has now been rescheduled for Sunday 2nd  September and the Wakes will no doubt return as usual in 2013, but what of the Village Festival? One of the Festival organiser’s, Barbara Breakwell commented “everyone’s been extremely supportive over the cancellation and we’re hoping it will go ahead next summer instead.”
(By Faye Stenson – photo’s provided by Eric Stenson & Ron Tew)