Traders on Ruddington’s High Street have been mopping up and assessing the damage after torrential rain on 17th June flooded many of their premises. The late afternoon downpour occurred as freak summer weather hit our village just after 5pm, turning roads into rivers in just minutes.

Among those closed by the flooding has been Benwell Daykin Estate Agents – which only began trading in January before COVID-19 Coronavirus forced it to shut its doors two months later. After a brief reopening its office sadly had to shut down  again whilst carpets were replaced and water damage repaired. 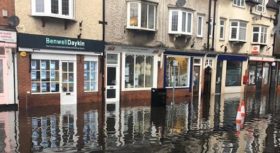 The newly refurbished Nottinghamshire Hospice Shop premises next door were also badly affected. Water got in under the door and via drains at the back, causing damage to the shop, office and toilet areas. It will now need more new flooring, new skirting boards and another complete redecoration before it can reopen.

Brand new business Sweet Moments – just two doors further along – also had to abandon its provisional launch plans when the water got in and ruined a lot of the stock. Thankfully the new equipment which had just arrived wasn’t affected.

Denise Selwood of Thomas James Estate Agents at 20, High Street says: “It was definitely a little scary in the offices. We were one of the lucky ones – we have quite a high step and it just came over onto our front mat – which was all the damage we had. The water level increased so quickly. Everyone joined together in the village to help – which was amazing!”

Helen & Simon Beale at Perkins Hardware spent several hours sweeping away the floodwater from inside their shop and cleaning up so that they could reopen – but estimate they lost around £300 of stock which was at floor level.

Water also seeped into the premises of Phoenix Flowers and Black Cat Café from the rear but, again, caused no serious damage. Across the High Street, floodwater entered both Coral Bookmakers and Dhaka Delhi. The slightly raised premises of The Frame Breakers pub next door escaped unscathed. 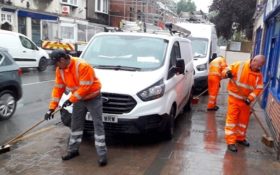 Mike Ader of traders’ support group Ruddington Village Centre Partnership (RVCP) says: “The flooding is so desperately unfortunate given that many shops have only just reopened after the lockdown. I’m delighted to see Ruddington traders rallying around each other to help those that have been so severely impacted by the waters.”

Mike adds: “RVCP will continue to work really hard in bringing traders together, signposting places to find funds and support and then actively encouraging Ruddington residents to shop locally and support village businesses.”

Among those who avoided being badly flooded were the (currently closed) Christopher’s Barbers at 16 High Street and The Bottle Top at No.2 High Street. Ruddington Post Office and Grange Bakery & Newsagent also reopened the next day as normal – and Jaspers Café was able to carry on with its “Afternoon Tea” deliveries.

Alex Preston says: “Thankfully we escaped….. but fingers crossed for no more rain! A big thank you also goes to Jen of The Split Screen Coffee Company and to the builders next door for their help and lending of sand bags!”

Elsewhere, the news wasn’t so good for Ruddington couple Cheryl Stretton and Rory Thorpe at their brand new distillery business, Ruddy Fine. Water poured into its offices – and flooding caused damage to the newly fitted kitchen. The good news is that the expensive distillation equipment was unaffected – meaning the launch of its new ‘London Dry Gin’ at The Bottle Top, Frame Breakers, White Horse and Ruddington Village Market on Saturday 4th July will proceed as planned!