In the last couple of months two new eating options have become available in our village – one on wheels and the other aimed at people on wheels!

After 18 months of planning, “Marilyn’s 50’s Diner” made its first, sizzling public appearance on Mere Way in Ruddington on the 7th   of September – followed by lunch on The Green the following week. It’s the new venture of Rob and Sam Mascari and will run in parallel with Rob’s established village kitchen business.

“But my Brazilian chef Bill Candeias will be doing most of the cooking!” explains Rob. “We’ll be looking to expand the ports of call from our current Thursdays by The Green and Fridays in The Business Park. We’re also available for local people to hire for special events – and we’re doing Goose Fair this year. I love ‘street food’ and wanted to create something more than a burger van. Ours is based on a 1950’s style American diner – and we’ve called it Marilyn’s because people are always telling Sam she has Marilyn Monroe’s blonde locks!”

Their impressive range of food includes burgers made with locally sourced meat and New York style hot dogs cooked on a chargrill, American Pancakes with a choice of fillings – and refreshments of course. 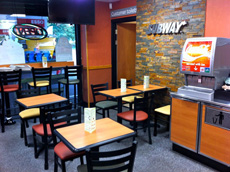 Special sandwiches are more the line of Ruddington’s other new fast food outlet – “Subway”! A village branch of the popular, international, quick service restaurant has appeared inside the Loughborough Road Filling Station following a major refurbishment by EuroGarages.

“We’ve got a great new Spar shop with a much bigger range of groceries”  says petrol manager Andy Mobley “and we now offer The Lottery, gas and electric top-ups and a free cash machine.”

But it does seem what has most excited our younger villagers is the new Subway – open from 7am Monday to Saturday and 8am on Sundays.

Manager Henry Appleby is bringing his 16 years’ catering experience to the post and told The Village Newsletter:

“We have a great new 11-seater restaurant – to eat in for the same price as a takeaway – with six types of bread to choose from and some great salads. It’s all made freshly in front of you and we’ve a good range of drinks. We’re already getting a lot of people in from the business park at lunchtimes but we hope everyone in Ruddington will come along and give us a try!”