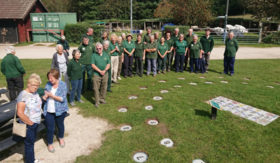 The Friends of Rushcliffe Country Park (FoRCP) recently celebrated 21 years of working to support the park and make it an attractive destination for local families. To mark the occasion, the team have created a new sun clock, known as an “analemmatic sundial”.

For several months, the Friends worked hard to build the sun clock, using hand-made ceramic mosaics to decorate each of its dials. A concrete slab, which indicates the month of the year when you stand on it, has also been decorated with mosaics made by the team. 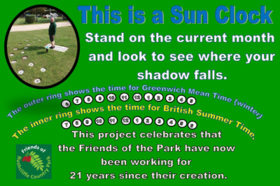 The current dials cover British Summer Time and the Friends’ next task is to create a new set to depict Greenwich Mean Time in the winter months. The new set will form a second ring of dials outside the existing ring.

The new sun clock was officially opened on Wednesday 4th September. Well done and thank you to FoRCP for all your hard work, and congratulations on your 21st anniversary.