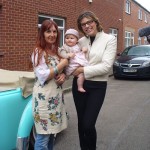 The Framework Knitters’ Museum was delighted to welcome a film crew from the TV programme Celebrity Antiques Road Trip to Ruddington over the summer. Well-known BBC news presenter Kate Silverton joined auctioneer Charles Hanson for an afternoon of filming at the museum in July. The Museum’s manager, Paul Baker, was filmed along with members of the framework knitting demonstration team. Says Paul: ‘The Museum is set to feature prominently in the episode of Celebrity Antiques Road Trip to be aired on 19 November 2012 on BBC2. The production team was with us all afternoon, so we’re hoping for some great coverage from the programme.’
(By Faye Stenson)