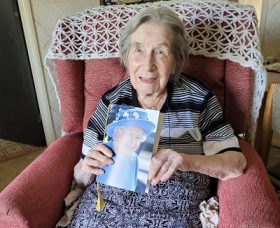 Freda Holland, who worked in Phethean’s Chemist on High Street in Ruddington, turned 100 on 18th July. As well as receiving a card from the Queen, Freda received a bouquet of flowers from Ruddington Parish Council.

Recalling her time at Phethean’s, Freda said: “It’s been a dispensary since 1905 and was run by three generations of the Phethean family until 1993. It was then sold to a larger company, originally under the Manor Pharmacy brand.”

With thanks to Sheila Forman