Hundreds of local people turned out to a Family Fun Day in glorious spring weather on Sunday 4 May at GCRN’s Heritage Railway Centre in Rushcliffe Country Park.

Organised in conjunction with Nottinghamshire Freemasons, the Fun Day was about involving community organisations and traders, and was also a fundraiser for GCRN and other local charities including Headway, a well-regarded Nottingham based organisation which helps people improve their lives after sustaining brain injuries.

Around 500 people descended on the Heritage Railway Centre to enjoy a wide range of activities and attractions. Ticket prices included rides on GCRN’s steam train service to and from Loughborough, and trips to Clifton and Rushcliffe Halt on heritage buses owned by their road transport division.

Equally popular was a miniature railway and an impressive display of vintage and classic cars and motorbikes, brought along by local enthusiasts. The Fun Day also featured a wide selection of stalls manned by charities and organisations including Nottinghamshire Freemasons, Nottinghamshire Search and Rescue, Riding for the Disabled, Ruddington Gardeners’ Association and Rushcliffe Play Forum.

There was no danger of anyone going hungry or thirsty, with a selection of food and drink on offer including burgers, hot dogs, doughnuts, tea and coffee and a tempting choice of home-made cakes. Local hostelry The Three Crowns also provided a bar service which grew increasingly busy as the sun made its presence felt. 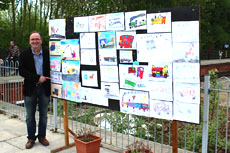 At midday, the Fun Day was officially opened by Dominic Heale, the well-known presenter of East Midlands Today, who also judged a painting competition with entries submitted by children at James Peacock School. After his official duties were over, Dominic took a walk around the stands to chat to stallholders and try his hand at some of the activities.

‘It was a hugely enjoyable day for everyone involved,’ said Graham Riche, Charity Steward for Nottinghamshire Mark Masons, and one of the event organisers. ‘We raised more about £4,000 for Headway and other charities and gave hundreds of local people a fantastic day out in the sun.’

‘I’d like to thank all the stallholders and exhibitors – especially Terry Beaven who ran the burger and doughnut stands, and Max and John from The Three Crowns who stepped in at the last minute to run the bar – and everyone who joined us on the day.’

Local freemasons distribute over £200,000 a year to local organisations and charities. Anyone who would like to know more about freemasonry or any organisation seeking support can contact Graham Riche on 07786 226 109.