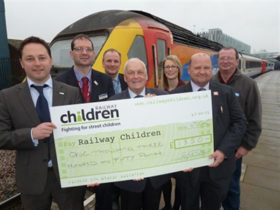 A High Speed Train 40th anniversary event at Ruddington’s Great Central Railway Nottingham (GCRN) has raised £1,350 for Railway Children. The charity was presented with a cheque on Tuesday 6 December by fundraisers from the 125 Group, GCRN and East Midlands Trains.

The money was raised at a special event that took place at the Heritage Centre on 19 November where a visiting East
Midlands Trains HST ran throughout the day to mark its 40th anniversary. It was the first time that this formation of train
operated on this line and proved to be very popular with visitors.

‘Our HSTs remain a firm favourite with many people, and along with the rest of the industry we wanted to celebrate their heritage and at the same time raise some valuable funds for one of our favourite charities.’ 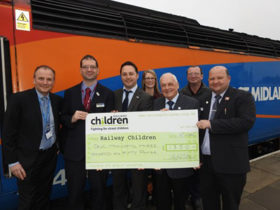 Dave Ellis, Corporate Partnerships Manager at Railway Children, said: ‘Railway Children are extremely grateful for the support generated and would like to thank everybody involved in helping to make the day the incredible success it was.

‘Over the last 20 years we have reached more than 270,000 children, who would have otherwise been completely alone and vulnerable on the streets. It’s incredibly fitting that the HST, such an icon of the UK rail industry and so integral during the last 40 years, helped in creating such fantastic support for Railway Children.’

Phil Stanway, Director of Great Central Railway Nottingham, said: ‘We would like to thank East Midlands Trains for the support given to both ourselves and 125 Group that not only enabled us to round off our operating year in style with a tribute to 40 Years of the HST with 41001, 43048 and 43082 but also enabled us to raise quite a substantial amount for one of East  Midlands Trains’ charity partners. This was all possible thanks to the hard work by East Midlands Trains and 125 Group along with our operations team to make it happen.’

Gary Heelas, Chairman of 125 Group, said, ‘It was great to see several hundred people enjoying themselves on the Great Central Railway (Nottingham) and joining in the celebrations of the 40th anniversary of 125mph HST services in the UK. We’re grateful to East Midlands Trains for the loan of 43048 and 43082 plus the two coaches, as well as the train crew who provided their services for free.’