A new agreement between the Great Central Railway (GCR) and Network Rail is set to enable the long-awaited connection of GCR Nottingham, based here in Ruddington, and GCR PLC.

The deal will enable the two sections of the GCR heritage railway to build a new bridge that will connect GCRN’s tracks, which run from Nottingham to Loughborough, with those of GCR PLC, which operate between Loughborough and Leicester. There is currently a 500m gap between the two sections, where lines were removed by British Rail in the 1970s. 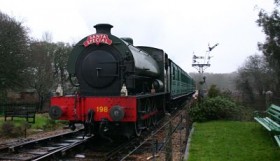 Design work has already started on the £1m bridge that will carry steam and diesel locos over the Midland Main Line track at the south end of Loughborough station, creating an unbroken 18 mile stretch of preserved railway. GCRN will also gain access to the main line connection that’s already in place within the GCR PLC section of the heritage line.

The new bridge will be formed from two ‘recycled’ railway bridges that were previously used by Network Rail. These will be laid end to end to create a new bridge that will carry a single track line over the Midland Main Line.

Other work that’s needed to complete the project includes repairing a bridge over the Grand Union Canal, building a second new bridge over a road in Loughborough and replacing a stretch of missing embankment.

Mark Fowler of GCRN comments: ‘There is huge interest and excitement amongst both railway enthusiasts and the general public in seeing this project succeed. It is vitally important to us that the local communities join us in this vision. It will drive economic benefit during construction and in the longer term too.’

In total, the bridge-gapping project is set to cost around £8 million, so GCR will be kept busy raising the funds needed to re-open the railway – which could take place within five years. The ‘Bridge for the Future’ fund has already been set up and you can find out more about the project and how to donate at www.gcrn.co.uk.