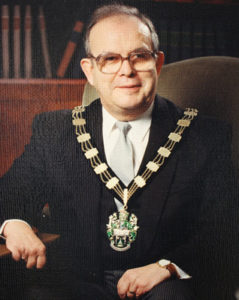 It was with sadness that we learned former Mayor, Borough and Parish Councillor Geoff Kelk passed away on 16th March, shortly before his 81st birthday.

Councillor Kelk represented Ruddington as a Ward Councillor for 18 years and held the civic role of Mayor in 1997 and 1998. He was also a member of Ruddington Parish Council from 1979 to 1999 and was Chairman between 1990 and 1995. During this time, he oversaw the Parish Council’s acquisition of Vicarage Lane Cemetery from the Church of England.

Geoff leaves sons Martin and Jonathan and a daughter, Wendy, as well as grandchildren and great grandchildren.
His funeral took place at Wilford Hill Crematorium on Tuesday 2nd April 2019. We pass our condolences to his family and friends.

With thanks to Peter MacGowan