Ruddington & District Choral Society (RDCS)’s Spring Concert on Saturday 16th May at 7.30pm in St Peter’s Church will be a night to remember, with some of the most powerful works of the 20th century being performed. In our often divided and turbulent world, the three major works each reflect upon man’s inhumanity to man and the need for peace and reconciliation in all its guises.

With soloists from Nottingham University,  the choir will perform the Choral Suite from Jenkins’ powerful, spellbinding and moving The Armed Man. This work was composed in 1999 to reflect on the passing of “the most war-torn and destructive century in human history” and to look forward in hope to a more peaceful future.

It will be followed by the Five Spirituals from Michael Tippet’s secular oratorio, A Child of Our Time. Tippet’s reflective and deeply moving work was written in the dark days of the Second World War as a response to the fascism, hatred and nationalism of the time and urges empathy and love for everyone, whatever their creed, colour or nationality. 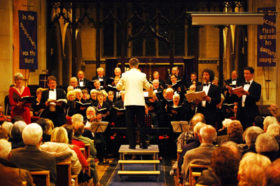 The final work will be Zoltan Kodaly’s Missa Brevis (sub-titled In Time of War). Composed while Kodaly took refuge for 50 days beneath the Budapest Opera House as the Red Army bombed the German-held city in 1945, this intense, poignant work is both a hymn of hope and a musical poem of praise to give comfort and strength in the most difficult of circumstances.

Under the baton of Director Paul Hayward and accompanied by Michael Overbury om the organ, our Spring Concert is an opportunity to hear some of the greatest modern choral works that have not only become much-loved, but have also helped shape our understanding and response to an often harsh, unpredictable and divided world.

Tickets cost £10 and are available from Perkins Hardware, Ruddington, from RDCS members, by calling 0115 921 1451 or on the door. To find out more, please visit www.ruddingtonchoral.com.