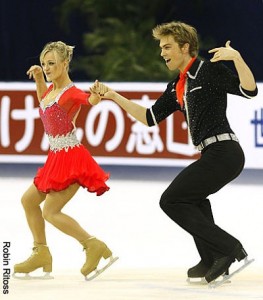 Our village has a Gold Medallist in the shape of Figure Skater Penny Coomes and her partner, Nicholas Buckland, whose family live in Wilford.

The couple appeared on the BBC “One Show” in early December just after winning the Gold medal in the Senior Dance Section of the British Figure Skating Championships. The pair who have been skating together since 2005 are actually a couple off the ice as well and  currently spend a lot of time training in America with the help of an ex Olympic champion, Evgeni Platov. This seems to be paying dividends, although Penny admits to missing “our little village”.

Penny and Nicholas are setting their sights on the European Figure Skating Championships being held in Sheffield later this month and  we wish them continuing success.