For as long as most of us can remember – 56 years to be exact – H. A. Bostock Ltd has been a surprisingly well stocked and convenient port of call for Ruddington’s DIY enthusiasts and tradespeople alike.

After a few false alerts the historic premises were finally put on the market this summer and have already been sold subject to contract. Trading officially ceased at the end of September – though a little stock clearance will continue for a short while. This includes a large number of “top quality” trouser zips!

The closure is due to the retirement of owners Tony and Hazel Theaker – with no one else to carry on their business. Also, of the six small shops originally at that end of the village, Bostock’s is the only one left – so they could see the writing on the wall. “Supermarkets and big DIY stores are taking over,” says Tony. “People use them for the bigger items now and only fall back on us for the bits. But we’ve managed to keep making a living out of it.” 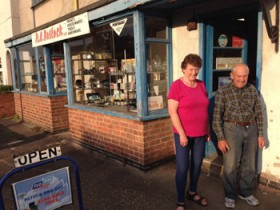 It’s actually Hazel who was the Bostock – one of three daughters to Harold & Ivy who converted the front of their home into a DIY shop back in 1959. They ran the business until 1968 – when they opted to emigrate to Australia! Then newly married Hazel and Tony decided to take over running the shop and have been there ever since.

“Because of the business name a lot people have called us Mr & Mrs Bostock over the years, but we’ve got used to it, and we don’t mind!” laughs Hazel. “It was mainly Tony who ran the shop because I went on to be a teacher.”

Hazel says it’s “sad” the business is closing and Tony admits it will be “a bit of a shock” at first! But they want to thank all the customers who’ve supported them for so long.

What next? Well, the couple already owns another house just around the corner so they won’t be going far. Tony hasn’t had a holiday for over twenty years, so that’s a definite possibility! He also plans to spend more time cycling. Hazel plans go to the gym more often AND hopes her husband will now come with her on her holidays!

The slightly tired old building itself looks set to be demolished – as the land already has outline planning permission to build two three-storey semi-detached houses in its place. Bostock’s will be sadly missed.