Nottingham Road between Gotham and Clifton will be closed for 6 weeks in January and February. This is to allow for a new junction to be built as part of enabling works for the £800 million Fairham development and forms part of the longer term ambitions for traffic calming in the area.

The closure will take place from Monday 18th January to Sunday 28th February, to enable the safe construction of a new staggered road junction to create access to the new development either side of the existing road. 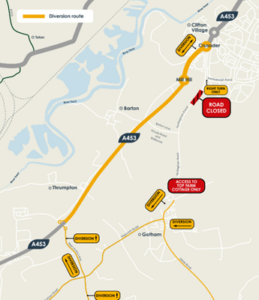 There’ll be diversions in place for Nottingham Road from Gotham in the south and Clifton in the north for all vehicles, cyclists and pedestrians. These will consist of signed diversions for cars, a designated cycle route, and pedestrian access via the existing public right of way through the fields between Clifton and Gotham.

Nottingham City Transport Bus Service 1 will be diverted during these works. All diversion plans are available to view and download at www.fairhamlife.co.uk.