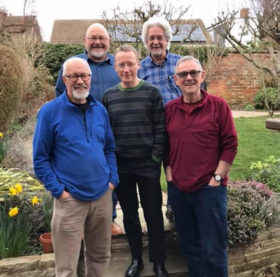 Higgs Bo’sun is an exciting, newly-formed folk band who’ll be playing in the Chapel at the Framework Knitters Museum for the Friends’ Winter Concert on Friday 29th November at 2.30pm.

They’ll be performing a mix of traditional and modern songs, ballads and shanties from English, Scottish, Irish and North American heritage. The five members use a variety of instruments. As well as the usual guitars, fiddles and banjos, a melodeon, bouzouki and bodhran may all make an appearance. Foot-tapping and singing along is encouraged!

Barbara Harrington from the Friends said: “As it’s getting close to the festive season, there’ll be a Christmas song or two, and mince pies after the show. Our annual concert has always proved very popular and we advise people to buy their tickets in advance.”