Ruddington’s Great Central Railway (Nottingham) has revealed that the latest addition to its heritage fleet should mean it will able to run trains here all year ’round.

Currently services are operated by its volunteers only through the summer, in the lead-up to Christmas and over some other half-term holiday periods. However, the imminent arrival of a Class 144 DMU Railcar (144003) from Porterbrook, to become preserved for heritage use, could see services increasing to 52 weekends a year.

Once it’s released from mainline duties during the first half of this year, and following a period of crew training and familiarisation, GCR(N) plans to use this bus-like train to extend its operations in Ruddington throughout low footfall and off-peak running seasons.

GCRN’s Commercial Director, Phil Stanway,  says: “Love or loath them, since the mid 1980s, Class 142, 143 & 144 ‘Railbuses’ have been a low cost and efficient way of transporting passengers to their destination over lines which may otherwise have seen a large decline in services or in some cases, no services at all.” 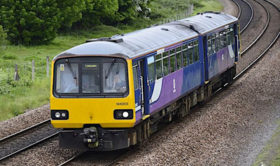 He adds: “We are extremely grateful to our friends at Porterbrook for their support in agreeing to the sale of 144003 which will enable us to increase our offering here at Ruddington, and we look forward to her arrival once withdrawn from mainline operation.”

Rupert Brennan-Brown, Porterbrook’s Head of Communications and Engagement says: “We are delighted to be able to support the Great Central Railway (Nottingham) with a Class 144 Pacer. These trains were in many ways the saviour of the social railway, so it is fitting that one of these multiple units will meet the future needs of a community and heritage railway.”

With two 1st Generation DMU sets currently undergoing long term restoration in Ruddington, GCR(N) says this could eventually pave the way for larger scale DMU based events here – as seen at other heritage railways throughout the country.

144003 is be cared for on behalf of her new owners by the newly formed GCR(N) 2nd Generation DMU Group. This is a group of existing GCR(N) volunteers, a large proportion of whom are said to have either current or previous experience of 2nd Generation DMUs on mainline operations and so bring to Ruddington a wealth of knowledge and experience.

Keep an eye out for further news on this heritage railcar, including its arrival date and inaugural running days, both here at RUDDINGTON.info and at www.grcn.co.uk.