By the summer of 1817, weavers, spinners, framework knitters and ironworkers in Nottinghamshire and Derbyshire were experiencing mass unemployment due to wars with France and the United States. Pentrich, a small Derbyshire village, became the unlikely setting for England’s last revolution.

Angry at Lord Liverpool and his government’s lack of sympathy with their situation, on the evening of 9th June 1817, several hundred armed men marched 14 miles to Nottingham expecting to find more supporters there. 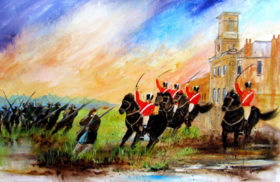 It didn’t end well for them as 45 were tried for treason, three hanged and 30 transported. Pentrich village itself suffered when the Duke of Devonshire, the local landlord, got involved.

On Thursday 16th May at 3pm, Professor Richard Gaunt will tell the whole story of the Pentrich Rebellion in the chapel at the Framework Knitters Museum.