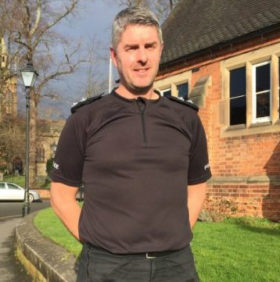 During the last six months, Ruddington seems to have experienced more criminal activity than usual. As well as the usual vehicle and shed break-ins, we’ve reported burglaries, local traders being targeted and hanging basket thefts. We’ve even had a distraction thief being wrestled to the ground.

But is it really that bad and, if so, is a lack of local policing to blame? Posts on Ruddington social media would suggest many residents and traders think so. Graham Wright, who runs the local website RUDDINGTON.info, had the chance to put villagers’ concerns to Inspector Craig Berry of Rushcliffe Police.

“If there’s a perception of a problem in an area then my job is to listen and try to understand what that problem is,” says Inspector Berry. “Then my team and the partner agencies work together to try and resolve it. We have dedicated neighbourhood policing staff, PCSOs and police constables allocated throughout the area.”

We don’t have space to reproduce the whole interview, but you can read it at RUDDINGTON.info. Here are a few of the questions asked and Inspector Berry’s replies.

Carla O’Brien said: “We need more police or community volunteer presence. What’s the plan for this?”

Inspector Berry answers: “You have two PCSOs and one PC responsible for Ruddington, East Leake and surrounding villages. We have extra staff available, so I can move them depending on the area’s needs. We’re a settled and experienced team but we’re also expanding, with two new PCSOs and two new PCs joining us shortly.” 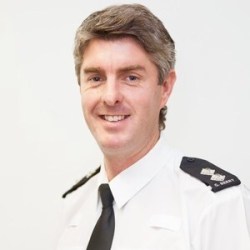 The Inspector then said that only 14 crimes have been reported in Ruddington so far in 2018. However, this figure comes in the wake of a period when reported offences were higher than usual.

“In December, we had four house burglary reports, for which we’ve identified a suspect, as well as the attempted burglary at the jeweller’s, the cooking oil thefts and the citizen’s arrest from November. When you add these together, you start building a picture of a problem that perhaps doesn’t bear out statistically.”

Nicola Pengelly isn’t convinced: “Ruddington does seem to be more of a target since the Police Station has gone. What happened to the PCSOs that used to patrol here?”

Inspector Berry replies: “Today, we’re technology enabled – meaning we can work from anywhere. My staff can come to Ruddington and patrol just as they’ve always done. They spend their entire tour of duty in their policing areas and take their mobile technology with them so they can be out covering their communities.”

Richard Thomas commented: “I understand the ever-growing pressure on police resources. I wonder what initiatives could be looked at? Do we have CCTV?”

Inspector Berry replies: “When there’s an area impacted by crime, we patrol more and offer crime prevention advice. CCTV can be useful in crime investigation and as a deterrent. Ruddington doesn’t have CCTV, like most villages. There are conversations that can be had with the Parish Council about that – but it has to be funded locally.”

Inspector Berry also explained the best ways to contact the police: “If someone is threatening, or committing a crime, dial 999. But if it’s a non-emergency, you can ring 101 at any time. You can also contact us via social media, but not in an emergency.”

Since our interview, there’s been a notable increase in the police presence in Ruddington. PCSO Kathy Lucock has visited St Peter’s Rooms to meet the public and attend the “Pub Watch” meeting. We’ve also had Special PCs Coster and Coffey (yes, their REAL names!) over from West Bridgford to patrol the village.

Whether current police resources will allow “Bobbies on the beat” to patrol here regularly, we’ll have to wait and see. But, after our “Interview with the Inspector”, it’s certainly been a good start – and a move that’s sure to be welcomed by residents.