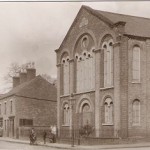 The Chapel on Church St - still in use today

First to be built was the Wesleyan Chapel on The Green – now occupied by Snowden Healthcare and Advance Physiotherapy (purported in the January Village Newsletter to be an old Quaker meeting house). It is a testament to the courage and fortitude of the Ruddington Wesleyans who endured four years of opposition, threats and intimidation from the local vicar, the landowner Sir Thomas Parkyns and others, before erecting the chapel in 1800. Then in 1829 the Primitive Methodists built their first chapel in Chapel Street (then known as “Rantergate” – “ranters” being the nickname for the Primitive Methodists). Both chapels were extended as Methodism increased dramatically in the 19th century due to the influx of framework knitters and were eventually replaced by larger buildings. Now a private home, a new Wesleyan Chapel was built in 1835 adjoining the original and in 1873 the Primitives built the Church Street Chapel – still very much in use today.
After the closure of the Starlight Rooms (some of you will remember!), Ruddington Framework Knitters’ Museum purchased the 1829 chapel in 1991 providing a useful venue not only for museum functions but for local groups to hire. For 182 years, it has continuously served this community in various guises and four years ago came full circle when the Methodist congregation returned to Chapel Street while the 1873 Church St. building underwent refurbishment.
It is worth noting that in our village the two Methodist societies got along in a state of “friendly rivalry” without the animosity experienced in other places. September 1932 saw national unification decreed at Conference, but here in Ruddington we had “been there, done that” eight months earlier (but that’s another story!).
We can be proud of our heritage of Framework Knitting which is inextricably linked with Methodism. In both respects Ruddington was a very important centre in the 19th century.
More information about the Framework Knitting industry and Methodism is available in the Museum Shop.   (Researched & written by Kathy Powis)