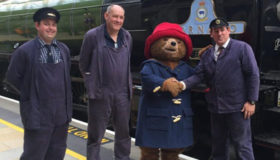 60163 “Tornado” will be blowing into Ruddington this month – and that’s the locomotive featured in the film “Paddington 2”! It’s coming here as the star attraction during the second weekend in February at Ruddington’s Great Central Railway.

You may or may not know that this A1 Peppercorn Class is Britain’s newest steam train, built only in 2008. As part of the celebrations for her 10th year in service she will be appearing in our village for the first time. 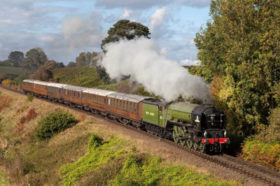 Despite her young age, Tornado is already iconic as a regular sight on mainline services and also having found fame on the television in “Top Gear” and “Tornado: The 100 MPH Steam Engine” – as well as the big screen appearance in the 2017 movie “Paddington 2”. She’s also the first steam locomotive to reach 100mph in 50 years – although we’re assured she won’t be attempting that during her visit here!

However, thanks to GCRN and the A1 Steam Locomotive Trust, you will be able to travel on one of eight, rather more sedate, return journeys from Ruddington to Loughborough Junction behind this locomotive – with four trains per day on Saturday 10th and Sunday 11th February 2018.

Booking details can be found by visiting GCRN’s website at www.gcrn.co.uk. Tickets are on sale now, priced at £15 for adults and £8 for children over 3 (under 3s are free but must be on an adult knee) for a return trip, with a strictly limited number of Day Rover tickets available for each day at £50. Advance online booking is strongly advised.