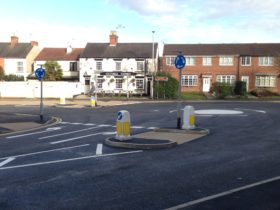 Recently a new mini roundabout has appeared in the village. The roundabout was identified as a necessary part of the planning permission granted to Bellway Homes for the 102 houses that are nearing completion on Pasture Lane, and Bellway paid for its construction.

Situated at the junction of Clifton Road and Wilford Road, the new roundabout – colloquially named “Tavern Island” – has been the subject of a lot of positive discussion within the village.

I personally feel that we’re all guilty of jumping to criticise when something isn’t right, but not so quick to praise when something works. According to views expressed on a local Facebook page, village residents agree. Claire said: “Let’s celebrate and praise when things work,” whilst Rachel stated: “Loving it – glad it worked and I was a doubter.”

Despite initial pre-construction concerns from some residents, it appears that the new traffic management system actually works very effectively. The construction period was well-managed, and the signage and double yellow lines clearly alert people to the new road priorities and restrictions.

Comments made by both motorists and cyclists acknowledge that there are now fewer queues, and the experience of travelling through this area of the village is much improved.

Unfortunately, the issue of impatient motorists jumping red lights at the pre-existing adjacent pedestrian crossing, coupled with vehicles being parked on Dutton’s Hill during restricted hours, are still generating concern and comment.