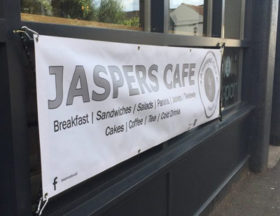 It’s less than a year since Ruddington’s newest coffee house began trading on Dutton’s Hill. Yet, since March 2017, Jasper’s Café has managed to establish itself as one of our most popular village venues to meet up for a cuppa, a chat and a bite to eat. Now it will have to close.

Jasper’s was the idea of Paul Carver and Cathy Hatfield who’ve always dreamed of owning their own coffee shop. As Bar Six traded mostly in the evenings they thought it made perfect use of a very suitable building during the day for this contemporary café – and it seems they were right! Its popularity has since enabled them to extend opening hours to seven days a week. But a redevelopment of the premises will mean they can no longer continue to trade from there. 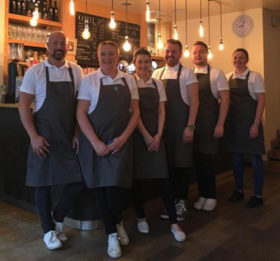 A Facebook post informed customers: “It is with extreme sadness we have to announce that on Friday 2nd February 2018 Jasper’s Café will close its doors for the final time. Paul, Cathy, Mark and the Jasper’s crew would like to thank all our valued customers and friends for their continued support and help over the last 10 months in making Jasper’s the fantastic success it has become. We are currently trying to source new premises but it seems unlikely that we will be able to remain in Ruddington given the shortage of suitable properties.”

It continues: “We will still be accepting orders for cakes and cupcakes and hope to be fully operational again soon. It has been a privilege and pleasure making so many new friends and I hope we will be able to welcome you all to a new Jasper’s somewhere soon.”

It appears the changes at 6 Wilford Road have been precipitated by the departure of John Noble and Lucy Would from Bar Six. This is now in the hands of Jack Robson, who runs McArtney’s Catering.