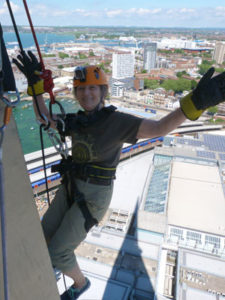 Following her daring Wing Walk in October 2016 when she raised £4,400 for the Framework Knitters Museum, Kathy Powis has sought adventure farther afield to raise funds for her other passion: the Mary Rose Trust.

Kathy is a patron and local speaker for the Trust. And on Saturday 2 June – a gloriously sunny day – she abseiled down Portsmouth’s Spinnaker Tower (a mere 100m!), watched by 9 friends and assorted locals and tourists who flock to the Gunwharf Quays area for the restaurants, bars, shops, boats and views over the harbour.

Kathy told us: “I should love to volunteer at the Mary Rose Museum but of course it’s too far away, so I had the idea of the abseil. To prepare, I had some training sessions at Nottingham Climbing Centre which proved very helpful. Over the weekend there were lots of other folk doing it too, some for charity, and the abseil staff gave us detailed instructions and put us at our ease. The descent took me about 15 minutes and I was able to wave to the crowds and take in the wonderful views.”

When asked “What next?” the answer came: “The Sydney Harbour Bridge climb is booked for later this year but that’s purely for fun!”