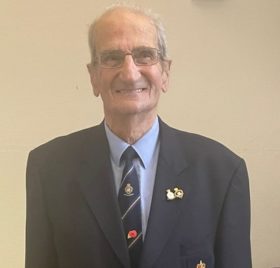 Ken lived in Ruddington for 74 years and was always involved in village life. He was one of the first volunteers for the Community Bus, volunteered at Ruddington Police Station and was Chairman of our Neighbourhood Watch scheme.

At the Nottinghamshire Royal British Legion County Awards Presentation Evening on 11th April 2022, Ken was posthumously awarded the highest standard for his service to the British Legion. It was accepted by his sons, Mark and Ian. The event was also attended by Ken’s widow, Marilyn.

We offer our condolences to Ken’s family and friends.