CT4N, which operates the L22 and L23 bus services on behalf of Nottingham City Council, has stepped in to save the two routes from being discontinued. As reported last month, the services were in danger of being stopped due to Council funding cuts. 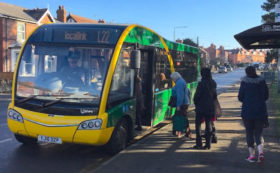 However, CT4N, which is part of Nottingham Community Transport, has now offered to run them on a commercial basis. Fares will now apply – which the Council were going to introduce had they decided to keep the buses running – but people with concessionary passes will still qualify for free travel.

Renamed the 22 and 23, the buses will follow the same routes and timetables as before, enabling Ruddington residents to access several areas that aren’t served by any other means of public transport. The changes will take effect from Monday 29th April. To find out more, please visit www.ct4n.co.uk.