Congratulations are extended to Ruddington resident, Corporal Jack Silcox, a serving Cadet since 2011, who has committed his entire Cadet career to the Robin Hood Rifles Corps of Drums, based at the Cadet Training Centre, next to the sports fields on Loughborough Road, Ruddington.

Corporal Silcox recently competed against six other potential Bugle Majors from around the country to be appointed as the National Cadet Bugle Major. 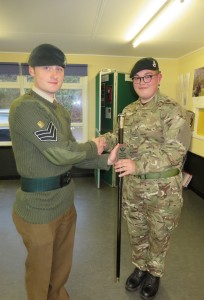 The competition is judged by one of the Army Reserves’ finest serving Bugle Majors, Bugle Major King, currently serving with 7 Rifles (AR) and the serving Regimental Sergeant Major of Cadet Force Bands. They agreed that Corporal Silcox’s standard of drill was much higher than his competitors; this and his general conduct made their decision an easy one.

With this new appointment as the National Cadet Bugle Major, Corporal Silcox will be stepping into a senior role on the following year’s Cadet Force Music Concentrations, which over 500 cadets will attend.

The appointment will also see him taking up a significantly more senior role within the Robin Hoods Rifles Corps of Drums, who parade on Tuesday nights 19:00-21:00 at the Cadet Training Centre as well as the wider community in general.