The final consultation phase before rescinding substantial areas of Ruddington’s Green Belt for new housing development began on 16th May with the publication of the Draft Rushcliffe Local Development Plan Part 2. This was approved at Rushcliffe Borough Council’s Full Council meeting on 26th April. 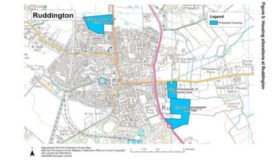 At that meeting, all but one Councillor in the Chamber voted to go ahead with the publication of the Plan as drafted. All three of Ruddington’s Borough Councillors approved the three final shortlisted sites on Ruddington’s Green Belt to build a total of around 350 homes. This was despite many residents and Ruddington Parish Council itself having grave concerns about the proposed development on the flood-prone fields west of Wilford Road.

To summarise, the draft plan proposes 130 houses on land west of Wilford Road (previously 180 on RUD01), 50 houses at the old Eco-Plants site on Flawforth Lane (RUD05) and 170 houses on land opposite Mere Way (RUD13). 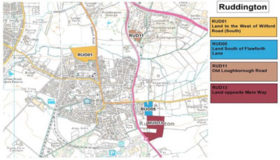 Local residents now have until 28th June to make suggestions or further express their concerns about the Draft Plan, either in writing or at the Borough Council website, before final decisions are made.

Printed versions of the Draft Plan – which covers sites for a total of 2,700 Green Belt homes bordering villages across Rushcliffe – are also available from Ruddington Library. After the six week representation period, the Plan and comments received will then submitted for examination by a Planning Inspector. It’s thought the Local Plan Part 2 could be adopted as early as December this year – when planning applications from developers for the sites will be sought.

If you’d like to make a comment or suggestion on the Draft Plan, you’ll need to submit it to Rushcliffe Borough Council no later than 5pm on Thursday 28th June. The Parish Council will be discussing its own response at the Parish Council meeting on Tuesday 26th June.