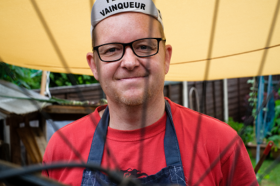 Julian Bentley is a self-employed Maths Tutor who, like so many others, watched his normal workload drop away during lockdown.

He continued to offer some Maths tutoring by video but as lockdown began, he noticed a lot of new bicycle riders in and around the village – many of whom were having difficulties such as too-low saddles, tyres low on air and so on.

“I knew from spending three years as a Cycle Instructor that a lot of new riders would have a knowledge gap around cycling matters, such as not knowing how to fix a puncture or correct defective brakes,” says Julian.

“So, having a bit of knowledge and experience from volunteering for other bicycle projects in Nottingham, I decided to offer free lockdown bicycle checks and fixes (socially distanced, of course). After posting on Facebook, I found the demand for my services was very strong!”

Since the first session on 6th June, Julian has met 31 local bicycle riders, worked on 34 bikes and done approximately 80 fixes. 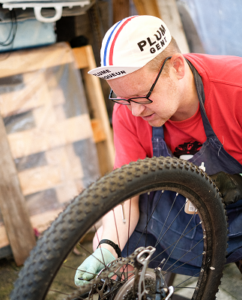 “Most people have seemed pleased with the service, but were surprised when I didn’t charge them. All I asked in return was for them to sign my petition, ‘Bring Back Rural Rides.’” (Rural Rides was a popular guided bicycle rides program that got the chop after County Council funding cuts in 2011).

“I’ve been surprised by the unsafe state of some of the bicycles people brought in – especially children’s bikes; even when relatively new, the cheaper ones are supplied with very low quality components that quickly fail.

“A common issue for most people is not having the saddle high enough (this causes knee strain and makes riding harder) – so that made for some satisfying and easy fixes. Overall, I’ve had a great response from people in the village and it was very rewarding to help them out with their neglected bicycles!”

You can read more about “Bring Back Rural Rides” and sign Julian’s petition at: www.change.org/p/nottinghamshire-county-council-bring-back-rural-rides-in-nottinghamshire.