Land clearance along its route was undertaken late last year before construction began in earnest on 7th January. 10 weeks later, the main work has now been completed on schedule – with the footpath quietly opening to pedestrians without any ceremony on Saturday 16th March.

The catalyst seems to have been a petition containing some 570 signatures in favour of the scheme to Crest Nicholson and NCC. This was started by villagers Jennifer Tinsley, Kay Garrett and Claire Harris, and facilitated by Ruddington Community Association and the Ruddington Neighbourhood Plan team. It was handed in by Ruddington’s County Councillor Reg Adair on 12th July 2018. Just eight months later, that extra pressure has helped to produce the desired result! 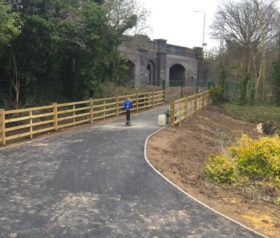 Chairman of NCC’s Communities & Place Committee, Councillor John Cottee told RUDDINGTON.info: “The path will open to the public – with landscaping works to the embankment and green areas next to the new footpath set to be carried out in the next couple of months. The new path, which is also for cycle use, will provide a safe and pleasant alternative for local people – in particular for children getting to and from local schools, parents with pushchairs as well as mobility scooter users who currently have to use the steep, narrow footway over the bridge on Clifton Road to get to local facilities.”

The original campaign for this access was launched over seven ago by former Ruddington Parish Councillor Barbara Breakwell. It was after residents from the new housing complained to her of their “dangerous” daily walk because the safer parallel footway/cycleway route which appeared on plans by the original property developer over a decade ago was never built – until now!

Barbara says: “I must admit, when I started this quest in October 2011, I did not expect it to take this long. But, as my Gran used to say, ‘Patience is a virtue’ and ‘Everything comes to those who wait’. Obviously I am delighted that everyone who comes to the village from that area will now have a choice of routes – and this purpose-built route will enable our local pupils to safely walk, cycle or scoot to school.”

Councillor Adair adds: “I’m absolutely delighted to see this path complete and open for public use because I’ve worked with local residents and supported the project from day one. I’d like to thank everyone for their patience and co-operation throughout the works. The path creates a safer route to school for the children from nearby housing developments.”

Low-energy, low-level lighting has been installed along the new path to try to keep the impact on neighbours and wildlife to a minimum. The landscaping works which will be taking place in the coming months will involve removing brambles, planting new trees, shrubs and bulbs to improve the adjacent green areas, and installing litter bins.