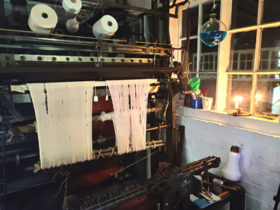 We reported in August’s edition of The Rudd that Matt Hamilton, Framework Knitter and Frameshop Coordinator at the Framework Knitters Museum was planning to embark on an epic 14 hour ‘Big Knitathon’ to raise funds for the museum.

Matt’s 14 hour knitting, which started at 8am and finished at 10pm, started as plain knitting, moved to simple lace, which progressed into complex lace, and finished with knitting by candle light (pictured above left). During the day, he managed 1,222 rows of knitting and 900 rows of lace.

Matt tracked his heart rate throughout, which averaged 96 beats per minute (BPM), with readings as high as 127 BPM at around 8am. His resting heart rate was 77 BPM; for comparison this is normally around 60 BPM!

Organising the Knitathon was a massive feat which took just under a year to come to fruition. The event itself drew lots of support from the local community, including the museum’s corporate partner, The Frame Breakers, who sent over a pie for Matt’s lunch.

BBC Radio Nottingham also covered the event and were on hand at 8am when Matt started out (this could explain the high heart rate!) Support also came from further afield, with donations coming in from outside the UK, including £115 from a supporter in the USA. 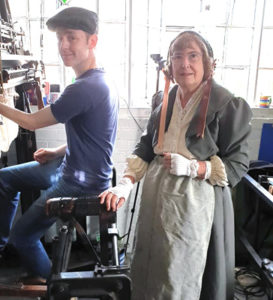 The money that Matt has raised will go towards the upkeep of the knitting frames at the museum and the workshop they’re located in. Whilst Matt has been the main organiser of the event, his efforts have been supported by the staff and volunteers at the museum, as well as the wider public.

Says Matt: “To say I’m pleased with the outcome of the Big Knitathon is a massive understatement! I’m very proud to have smashed my fundraising target and that the monies raised will go towards maintaining and preserving the museum’s historic knitting frames and workshop.

“Thank you to everyone who’s donated or supported the Knitathon in any way – your help really was so welcome and very much appreciated.”

Donations to the Knitathon are now closed, but you can still donate directly to the museum. Visit www.frameworkknittersmuseum.org.uk to find out how you can help.