91 year old Ruddington resident Dennis Marriott has been awarded a medal for his service on the Arctic convoys during the Second World War.   Dennis was born in Woodley Street in 1922 and has lived in Ruddington all his life.  He and his wife, Vera, have recently celebrated their 65th wedding anniversary. 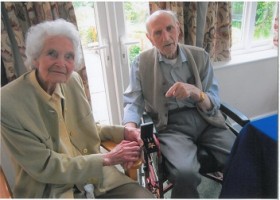 Dennis served in the Royal Navy during the war and was commissioned to the merchant ship Athol Templar as a Royal Navy gunner in 1942 as part of Convoy PQ 18.  The Artic convoys delivered vital supplies from Britain to northern Russia. They were under constant threat from U-boats and German aircraft as well as having to deal with sub-zero temperatures and storms.

There were 78 convoys between August 1941 and May 1945.   About 1400 merchant ships delivered vital supplies to the Soviet Union, escorted by ships of the Royal Navy, Royal Canadian Navy and the U.S. Navy.

85 merchant vessels and 16 warships were lost.

The Athol Templar was torpedoed.  42 crew were saved, including Dennis, and transferred to a rescue ship, HMS Copeland.  When they arrived home in Scapa Flow, Scotland they were met by Winston Churchill.

The medal for Arctic convoys was created in December 2012 after a long campaign to honour the brave men who served in this way.