John is the founder of the award-winning Lenton Lane Microbrewery. 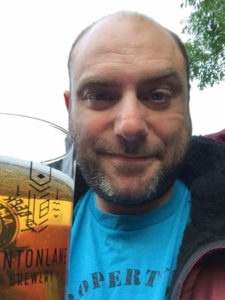 John moved to Ruddington from West Bridgford in 2007 and has lived here ever since. He worked as a freelance web developer and still does, but in 2014 he founded the Lenton Lane Microbrewery (www.lentonlane.co.uk), whose beers have been selling really well in Ruddington pubs and elsewhere.

The brewery produces 4,000 pints of beer every week and regularly wins awards for its quality. The name tells you where the brewery is, but it could have been based in Ruddington and creating jobs locally. However, suitable business premises weren’t available in the village at the time.

“I really like living in Ruddington” said John. “It’s quiet and genteel (for the most part!) but close enough to town for all the facilities and attractions there”.

John was asked to describe three good things about Ruddington. He said:

1. The people. I’ve made good friends here. People are friendly. After 10 years or so of living here, one or two have even bought me a pint.

2. The shops and amenities. I rarely do any day-to-day shopping outside Ruddington. I live so close that I treat the Co-op like a  walk-in larder. And of course, the pubs – who could forget the pubs? The buses are good, too.

3. The Country Park. We’re very lucky to have this.

What’s not so good about the village? John said:

1. Traffic. Getting in and out at peak times can be a little trying.

2. Parking. Church Street is a thoroughfare, not a car park. People reverse out in front of me every single day I drive there.

3. Space. We would have liked to open the brewery here in Ruddington, but there just wasn’t anywhere suitable at all. So, the opportunity to produce and sell Ruddy Good Ale was lost.

So there you have it: John’s personal take on Ruddington life. The point about there being an absence of suitable premises to  open a business that would create local jobs and wealth, and add prestige to Ruddington, is something for the planners to note.