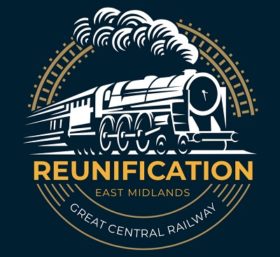 The Great Central Railway (GCR)’s ambitious Reunification project has leapt forward with a month-long fundraising push. Money Match March offered to match all donations received during March pound for pound, up to a value of £100,000.

Support was received from enthusiasts and well-wishers around the world. A late flurry of donations received just before month-end saw well over £150,000 being received, over the available “matching funds”. With the match funding, the new grand total is an incredible £755,000.

“We can’t quite believe we’ve reached three quarters of a million pounds,” said Andy Fillingham, Chairman of the Friends of the Great Central Main Line, the membership organisation for the GCR which is driving the fundraising. “The generosity of the support

has taken our breath away. We now have 25% of the £3m we need to build the next two phases of the Reunification project.” 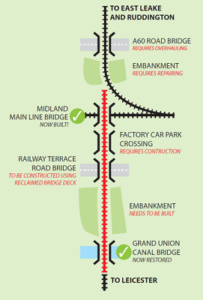 Reunification will bring together two separate halves of the Great Central Railway which were separated after the original line was closed in the 1960s. The two lines combined will create an 18 mile heritage line connecting Ruddington with Leicester, which will boost the local economy and create jobs.

Two stages of the scheme have already been built after millions of pounds were raised. The

next two phases will see a local road crossed on a bridge and a viaduct built over a factory car park.

“Our funding grows all the time as people give by standing orders,” explained Andy. “We will need to have raised most of the full cost of the next section before we can start building it, but the incredible response to Money Match March brings that day closer. We can’t thank everyone who has supported us enough. As the railway gets closer to reopening, this has been a tremendous boost.”

Donations can be made online at www.gcrailway.co.uk/unify.

Cheques for the appeal can be made payable to The David Clarke Railway Trust and posted to DCRT, Lovatt House, 3 Wharncliffe Road, Loughborough, Leicestershire, LE11 1SL.