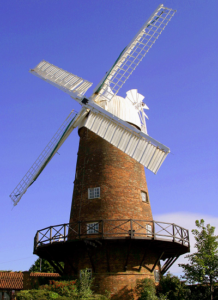 The Friends of Ruddington Framework Knitters Museum are back in action with a programme of events for the year, starting with “George Green, the Man, the Mill and the Maths”.

Sam Boote, a volunteer guide at Green’s Mill, will give a talk about the history of the popular local landmark and also George Green’s career as a brilliant, largely self-taught scientist and mathematician.

George Green, senior, had purchased the old post mill in Sneinton in 1807. By the early 20th century, it had fallen into disrepair but was lovingly restored in the 70s and 80s. It was back in action by 1986, becoming one of Nottingham’s most popular tourist attractions.

George Green, junior, worked in the mill until 1829. His “Green’s Theorem” of 1828 is still relevant today in the world of nuclear physics.

The talk will be held in the former chapel at the Framework Knitters Museum, Chapel Street, on Tuesday 31st May at 2.30pm.

Tickets cost £5 include refreshments and are available directly from the Museum, or by calling 0115 984 5375.