The Framework Knitters Museum has been awarded the Working with Children and Young People Award at the Nottinghamshire Heritage Awards 2016 for their partnership with Rushcliffe School. The award was announced at a formal ceremony at Nottingham Trent University on Wednesday 8 June.

Deputy Chairman of the museum trustees, Julian Ellis, said, “This award does not only recognise the innovative thinking of our museum manager, Paul Baker, but is a tribute to the pupils and staff at Rushcliffe School for their work in developing this award winning partnership”. 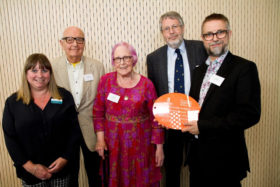 The unique partnership between the museum and the school started when the museum undertook a £100,000 redevelopment in 2014.

Pupils were invited to work alongside the professionals who were responsible for designing the exhibitions, creating new educational resources including a multi-award winning interactive film, and for promoting the relaunch of the museum. Their feedback, ideas and input not only directed the decision making processes for the professionals, but the pupils were able to engage creatively in the project by starring in the film. This latest award win joins an already extensive list of accolades which the partnerships, and the resulting educational film, have achieved. This includes an award at the European Heritage in Motion Awards, two at the East Midland Heritage Awards, and attaining the coveted Sandford Award.

For more information on the Framework Knitters Museum visit: www.frameworkknittersmusuem.org.uk.