In 1952 a young engaged couple visited Ruddington to see a site on Old Road, then largely undeveloped, where they were to have a home to be named ‘Long Acre’ built. 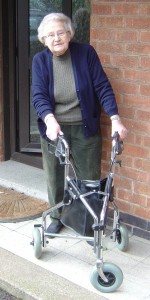 Doreen Cooper and Richard Beardall married on the 30th April 1953 and moved into their new home a month later.

Richard was to become a Parochial Church Councillor and through him Doreen met Dorothy Shrimpton the Vicar’s wife. In 1969 Dorothy discovered a framework knitters’ complex on Chapel Street, then being used as a plumber’s yard by local plumber Sid Rivington.

The historic value of the complex had already been recognised and Doreen joined Dorothy to try and raise the asking price of £2,000. Still lacking over £900 and with the deadline of 31st March 1971 looming, Doreen approached a family friend, Gordon Hibbert of Pretty Polly Hosiery and he gave her a cheque to complete the purchase. Doreen, by now a Trustee of the charity that had been formed, was to serve in that capacity for 25 years. Her family connection with the knitting industry through her father Vernon Cooper was to play a big part in the developments at Chapel Street and in 2003 she was awarded the M.B.E for her services to the Framework Knitters Museum. In addition, Doreen served as a Magistrate for 21 years and worked for the Childrens Society. Richard had become a Parish Councillor serving for 12 years and fundraised for the British Heart Foundation for many years. Sadly Richard died in 2013 and Doreen has decided to move to Aldeburgh in Suffolk to be nearer her son Charles and his family.

This ends a family’s service to Ruddington after 62 years. We wish Doreen many happy years in Suffolk.