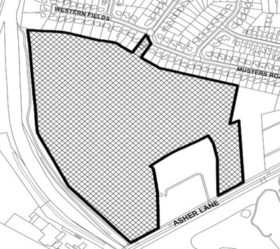 In May 2018, planning permission was granted for 175 new homes to be built on land owned by Space Foods Ltd, south of Musters Road. One of the most controversial aspects of the application was Space Foods’ proposal to create an entrance to the new development by demolishing 75 Musters Road – which it also owns – and build an access road there.

However, this proposal was rejected at a Rushcliffe Planning meeting held on 10th October.

Explaining their decision, which may come as a relief to many residents, Rushcliffe Borough Council’s Executive Manager for Communities, Dave Mitchell, said: “The application was refused on grounds that the development would unacceptably impact on the amenities of the properties immediately adjacent to the site access point and in the wider area along Musters Road and Distillery Street by reason of increased noise and disturbance from vehicle movements associated with the development.”

Space Foods has the right to appeal against the rejection, so there’s still a chance the new access road goes ahead. If the decision stands, there will be two access roads built to the south of Asher Lane. These will require Asher Lane itself to be improved and upgraded, including new pavements and parking regulations. The developer will fund these changes as well as paying for the new access roads to be built.