Nottinghamshire Police have revealed a new Constable dedicated to our village.

PC Stephen Piper has joined PCSO Philip Evans to focus on neighbourhood policing in Ruddington. He’s promising to engage with the public and respond to the key policing priorities here. PC Piper, who has more than 20 years’ experience as a response officer in the Metropolitan Police and in Nottinghamshire, says he’s received a very positive reaction from residents. 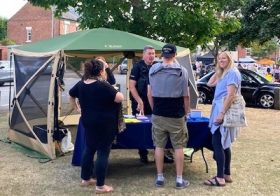 He’s already been out and about meeting members of the public at our August Village Market (pictured), taken part in a bike-marking event at Rushcliffe Country Park and plans to attend future meetings of Ruddington Parish Council (RPC). Motorists may also have spotted him responding to concerns about speeding by hitting the pavements with a speed gun to deter nuisance motorists.

“I’ve enjoyed getting out on foot and meeting people, and hope to continue this in the coming weeks,” says PC Piper. “Being a community officer is very different to being a response officer. You get the time to engage with the community and follow jobs through from start to finish.

“I’m keen to hear people’s concerns and look forward to concentrating on key rural crime issues like speeding and vehicle crime, which are highlighted to us all the time.”

Our new bobby reveals he enjoys cycling and golf when not on the beat.

Also with a new role at Rushcliffe Police is PC Dan Clarke, who’s become the beat manager at Keyworth. Inspector Rob Lawton, Rushcliffe’s neighbourhood policing inspector, says: “It’s great news for the communities of Ruddington and Keyworth to have new officers in post. Steve and Dan have got off to a great start and are already making a difference to the lives of people who live in those villages.

He adds: “They’ll be keen to hear your concerns, so if you see them out and about please go and say hello.”