Two new defibrillators have been installed in Ruddington, thanks to the generosity of our village. When I heard that Juliet Abbott from Compound Strength and Conditioning Gym was fundraising for a defibrillator, I immediately got in touch to offer to help. Almost £3,000 was raised through raffles and cake sales, and at Wilbur the Village Cat’s 10th birthday party last summer.

Although Ruddington already had several defibrillators, only two of them were accessible 24 hours a day and both of these are in one end of the village. 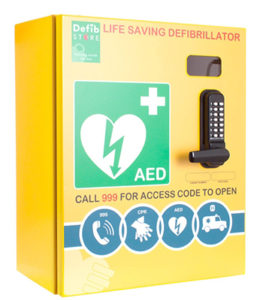 Being in close proximity to a defibrillator is vital in the event of a cardiac arrest to increase your chances of survival. Each minute of delay reduces the probability of survival by 10%. Ruddington is a busy and often congested village, so having more 24 hour defibrillators spread around the village is really important.

The two new devices are positioned on the walls of Near and Far removals on Brookside Road, and Edward James Flooring on Ashworth Avenue.  Both businesses have shown tremendous support for the project and will not only foot the electricity costs, but also do routine checks on the devices to make sure they’re working properly.

We hope to run some free community training sessions on the use of the devices soon.

A massive thank you to everyone who got involved in fundraising for the new defibrillators, from donating raffle prizes and knitting cats through to buying cakes and biscuits. There are way too many people to thank – the whole village got behind us to make this happen, which is pretty spectacular.