Hareham Gardens Allotments have a lovely new footbridge. It replaces an old one which had begun to rot and would have become unsafe if left.

The bridge spans a stream and gives safe access between the two halves of the allotment site. It’s also suitable for wheelchair users. The adults with learning difficulties who are supported by the THERA Trust to grow crops on one of the plots will benefit from the bridge’s increased safety to get between the car park and their plot. 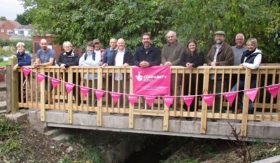 Construction has only been possible with financial help from The National Lottery Community Fund, The Jones 1986 Trust, The Sir John Eastwood Foundation and local Rushcliffe Borough Councillors Jen Walker, Mike Gaunt and Gary Dickman. Gary has also provided free management to the project on site.

Several allotment holders have helped firstly with fundraising and then with construction. In particular, thanks must go to Geoff East and John Robertson who organised the fundraising; Peter Johnson-Marshall who did the design work; and Darren Oates who built the handrails.

When Gary took the old bridge down, the extent of rot was quite surprising and this confirmed our decision to go for a long-life concrete deck this time. Gary also used his knowledge to organise a small crane to lift in precast concrete beams followed by ready-mix concrete for the deck.

It now feels really solid underfoot as it is strong enough to carry a football team let alone the expected wheelchairs and wheelbarrows!

As well as the bridge itself, the THERA group now have new fencing connecting to the bridge to keep their people safe.