The team’s Manager, Peter Hollingsworth, explained: ‘We had a hugely successful season last year winning two leagues and also the cup competition, but unfortunately we saw a number of boys starting to grow which meant the existing strip was too small. 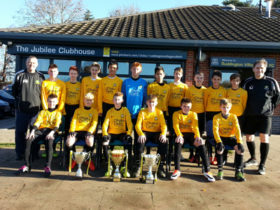 ‘I met with Mahbu Noor, the owner of Dhaki Delhi, who was delighted to help and as a result the team received a new strip with the Dhaki Delhi logo on their shirts. It’s a fantastic new kit which was well received by boys and parents alike – to such an extent that I organised a meal for the parents at Dhaki Delhi to celebrate.’

The team hope their new kit will continue to give them good luck in the forthcoming months.